The AI platform, designed by Insilico Medicine, could be a game changer for the pharmaceuticals industry.

Insilico Medicine, a company using artificial intelligence to accelerate the rate of drug discovery, today announced the successful design of six novel drug targets by their AI platform. Writing in Nature Biotechnology, the paper describes a timed challenge, where their new artificial intelligence system called Generative Tensorial Reinforcement Learning (GENTRL) designed six novel inhibitors of DDR1, a kinase target implicated in fibrosis and other diseases, in 21 days. This 2-3 week period represents an enormous acceleration from the time that traditional methods take to find viable candidates, of about 2-3 years.

Four of the discovered compounds were active in biochemical assays, and two were validated in cell-based assays. One lead candidate was tested and demonstrated favourable pharmacokinetics in mice.

If Insilico’s drug candidates prove to be successful in later clinical trials, those could really represent an enormous advance for the entire pharmaceutical industry. That’s because traditional routes open to drug developers are prohibitively long and expensive. The path to pre-clinical stages is arrived at after an average of 3-6 years (depending on the drug being trialled) and involves testing thousands of small molecules, from which researchers may obtain just a few promising candidates. Before they’re allowed to enter the market, the shortlisted molecules must then run through another ten years of trials – testing safety and efficacy across mouse and human models.

This makes the gauntlet that drug candidate’s run capital-intensive and risky. And only one in ten of the successful lead candidates make it. If we factor in infamous translational problems between animal models, it’s no wonder that the last two decades of pharmaceutical research has seen so many big busts and insider-trading scandals. The costs of failure are registered even further beyond the market, in the thousands of lives lost when hoped for drugs fail to materialise. 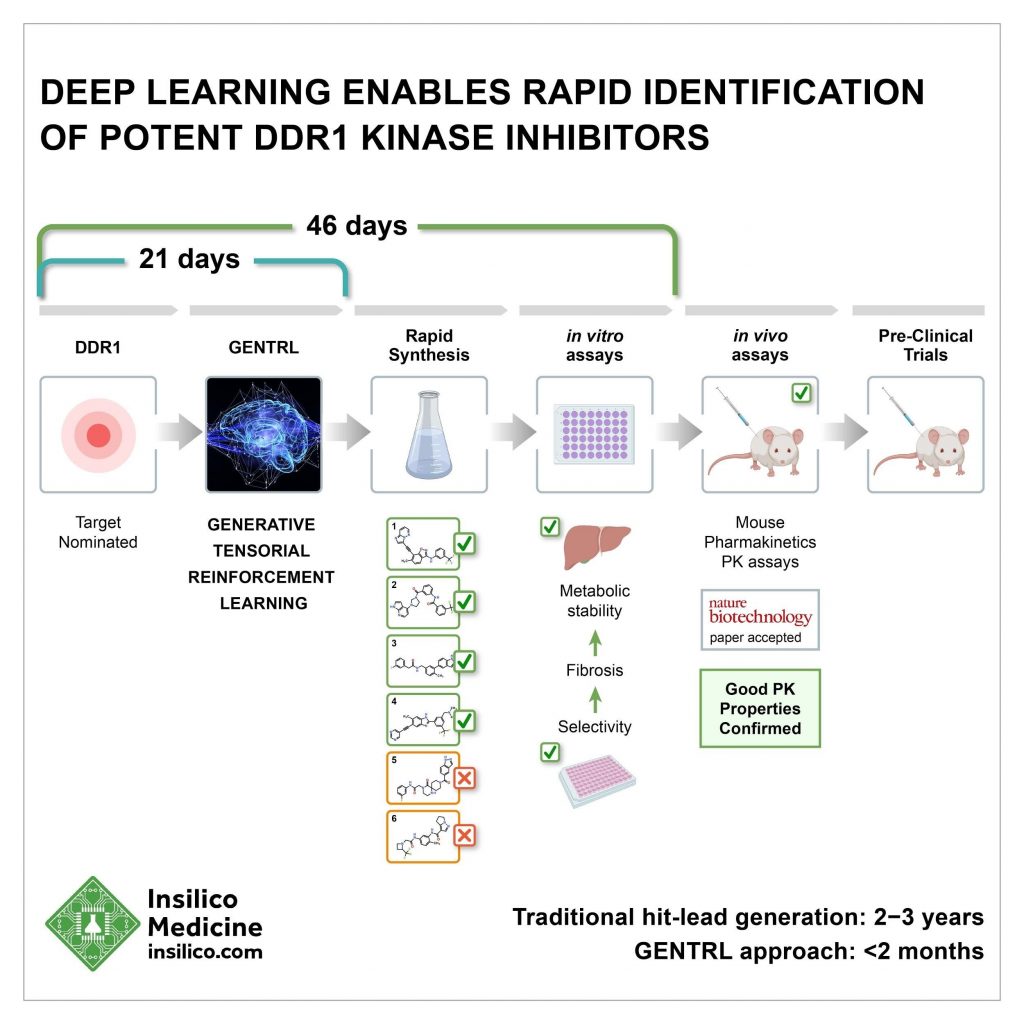 “This paper is a significant milestone in our journey towards AI-driven drug discovery. We work in generative chemistry since 2015 and when Insilico’s and Alán’s theoretical papers were published in 2016 everyone was very sceptical,” says Insilico’s CEO Alex Zhavronokov. “Now, this technology is going mainstream and we are happy to see the models developed a few years ago and producing molecules against simpler targets being validated experimentally in animals. When integrated into comprehensive drug discovery pipelines, these models work for many target classes and we work with the leading biotechnology companies to push the limits of generative chemistry and generative biology even further.”

Insilico is a portfolio company of Juvenescence, who are the largest fund in the Longevity space, having recently acquired $100m in their last round to cap off a total valuation of $500m. “We at Juvenescence are impressed and proud to be early partners and investors in Insilico Medicine, which is using GANs to generate novel compounds, with significant scientific success,” says Juvenescence founder Jim Mellon.

Ben Turner
Staff Writer Ben Turner is a writer and journalist based in London. He graduated in 2015 with a Master’s degree in Physics. He is particularly interested in the translation of early scientific discoveries into cutting-edge tech.

A new paper supports the targeting of aging processes, rather than just one disease, to improve Longevity outcomes. Multimorbidity is a challenge for Longevity; defined...
Read more
AI

Insilico Medicine and Arctoris announce robotics/AI partnership to focus on COVID-19 inhibitors that could have wide-reaching benefits for Longevity. Two companies have joined forces in...
Read more
Diet

A new paper supports the targeting of aging processes, rather than just one disease, to improve Longevity outcomes. Multimorbidity is a challenge for Longevity; defined...
Read more

Insilico Medicine and Arctoris announce robotics/AI partnership to focus on COVID-19 inhibitors that could have wide-reaching benefits for Longevity. Two companies have joined forces in...
Read more

The results are in: sharing our Longevity investment survey

There is rapidly-increasing activity in both the research and the investment communities that focus on Longevity; this survey gets into the details. The global Longevity...
Read more