Harvard researcher proposes the Daphnia water flea as an alternative to worms for building a scalable platform for antiaging drugs research. In many ponds and...
Read more
Sponsored content

Optimise, energise, revitalise – MitoQ is on a mission to supplement your mitochondrial health. Coenzyme Q10 – or CoQ10 – is made naturally in the...
Read more
Features

Changing the narrative – Celine Halioua reveals why the aging field needs to be taught some new tricks. Celine Halioua is the Founder and CEO...
Read more
Investment

Harvard researcher proposes the Daphnia water flea as an alternative to worms for building a scalable platform for antiaging drugs research. In many ponds and...
Read more

Optimise, energise, revitalise – MitoQ is on a mission to supplement your mitochondrial health. Coenzyme Q10 – or CoQ10 – is made naturally in the...
Read more

Changing the narrative – Celine Halioua reveals why the aging field needs to be taught some new tricks. Celine Halioua is the Founder and CEO...
Read more

Finding out what’s behind the $20m bioprinting start-up.

Vancouver-based Aspect Biosystems recently closed a $20 million funding round, making it one of the world’s most well-funded 3D bioprinting companies. We spoke to the company’s founder and CEO, Tamer Mohamed, to see where the company is headed, but first to find out where it all began…

Aspect Biosystems was born out of a research lab at the University of British Columbia, where Mohamed and his co-founders were working out of a lab in the Applied Science Department on the development of advanced printing technologies.

“Specifically, our project was focused on printing biological structures. But back then we had no idea that we would start a company,” says Mohamed.

Towards the end of their three-year research programme, Mohamed and his co-founders participated in a program at the University that brought together the best and brightest scientists and engineers that showed entrepreneurial potential. The program supported them through training and mentorship and helped secure early seed funding and led to Aspect Biosystems being founded in 2013.

The company’s focus was to develop a platform from the bottom up that unlocks the potential of tissue engineering.

“The key breakthrough was marrying microfluidics with 3D printing – we are the first in the world to really pioneer this approach,” says Mohamed. “What the microfluidics allows you to do is extend the design flexibility of tissue engineering, incorporating all of the different components, different cell types and different materials, in a very streamlined, almost digitised, fashion. We are able to take all of the different inputs and combine them through computer control to create these very heterogeneous structures, which is important because tissues inside of our body are not just homogeneous structures, they’re made up of many different types of materials and cells and other important features.” 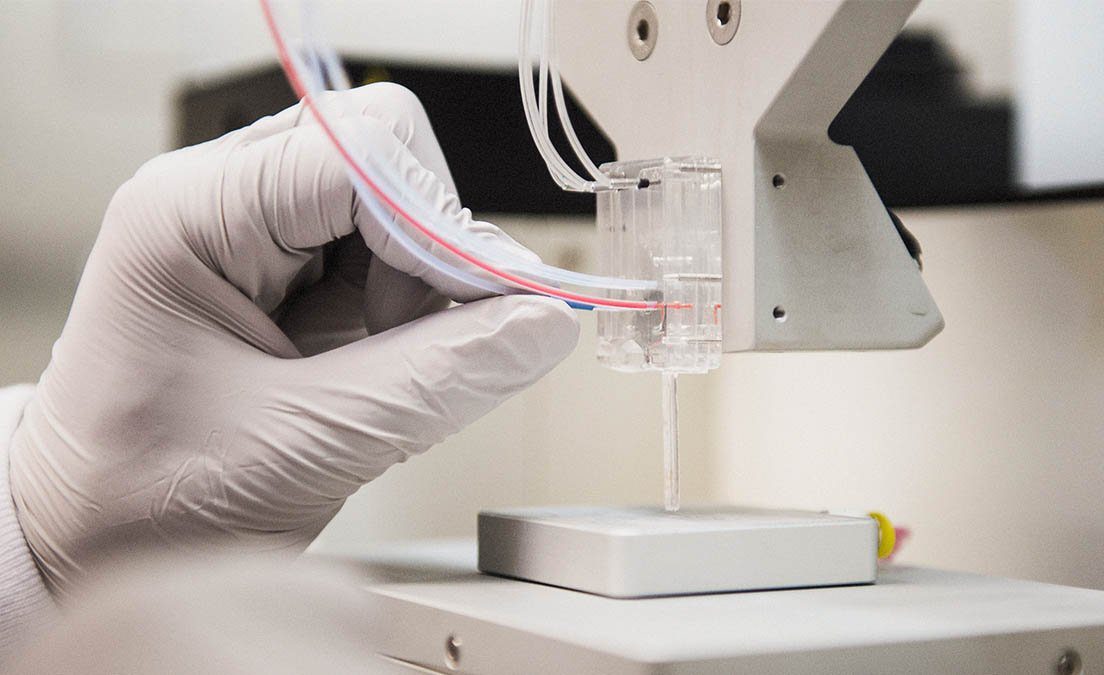 The company’s next focus was using the platform to create its own tissues. For example, for the development of a pancreatic patch for Type 1 diabetes, which involves printing insulin-producing beta cells, putting them in an environment to keep them alive, but also putting them in an environment to evade the immune system so it doesn’t kill those cells.

But beyond the technology and the biology, Aspect Biosystems also differentiates itself through its business model.

“We recognise that if we’re ever going to get to a future where we’re taking full advantage of this technology and its broader capabilities, we can’t work alone,” says Mohamed. “And so we work very closely with academic researchers, as well as commercial groups.”

With academic researchers, Aspect provides access to its platform through a technology access fee, generating revenue for the company. But it also has the opportunity to in-license the tissues developed on its platform.

“So think of it almost as creating this network effect, where we have researchers around the world using our technology for a multitude of different applications,” says Mohamed.

“So we’re really trying to use our platform to unlock the full potential and that involves using it internally, but also collaborating strategically with researchers and partners…”

“We’re really trying to use our platform to unlock the full potential and that involves using it internally, but also collaborating strategically with researchers and partners,” says Mohamed. “And so we think that provides a very compelling differentiated story that could change many aspects of healthcare.”

In the early days, the company was focused almost exclusively on partnering, mainly on tissues for drug development. This is still a significant part of Aspect’s strategy, but the company has also now moved into other areas as a technology-enabled therapeutics company.

“We’ve evolved as the market has evolved’ says Mohamed.  Specifically in regards to cell therapy and our understanding of stem cell science and maturation of our platform, we’ve started to take on more of a regenerative medicine focus, and started to create our own internal programmes. “A key reason behind our recent financing is to really push these programmes forward. We want to leverage the full capability of our platform so, ultimately, our goal is to get therapeutics to patients. But we also are trying to create a pipeline of opportunities working with our partners.”

The two lead internal programmes at Aspect are focused on meniscus tissue generation, as well as the pancreatic tissue therapy for Type 1 diabetes, both at the preclinical stage. The company will be presenting new data from these programmes at conferences this year.

Mohamed sees a clear connection between his company’s work and the global Longevity agenda.

“If we can create a replacement meniscus for people who have degenerative meniscus or meniscus tear we can keep older patients active longer in their lives, which obviously has a direct correlation on longevity and extending lifespan,” he says. “Type 1 diabetes has an average reduction in lifespan of about 10 to 15 years. So if we could actually manage glucose levels with this bioengineered pancreatic tissue, we could potentially extend life expectancy and give people better quality of life so that you don’t have to rely on insulin injections.” 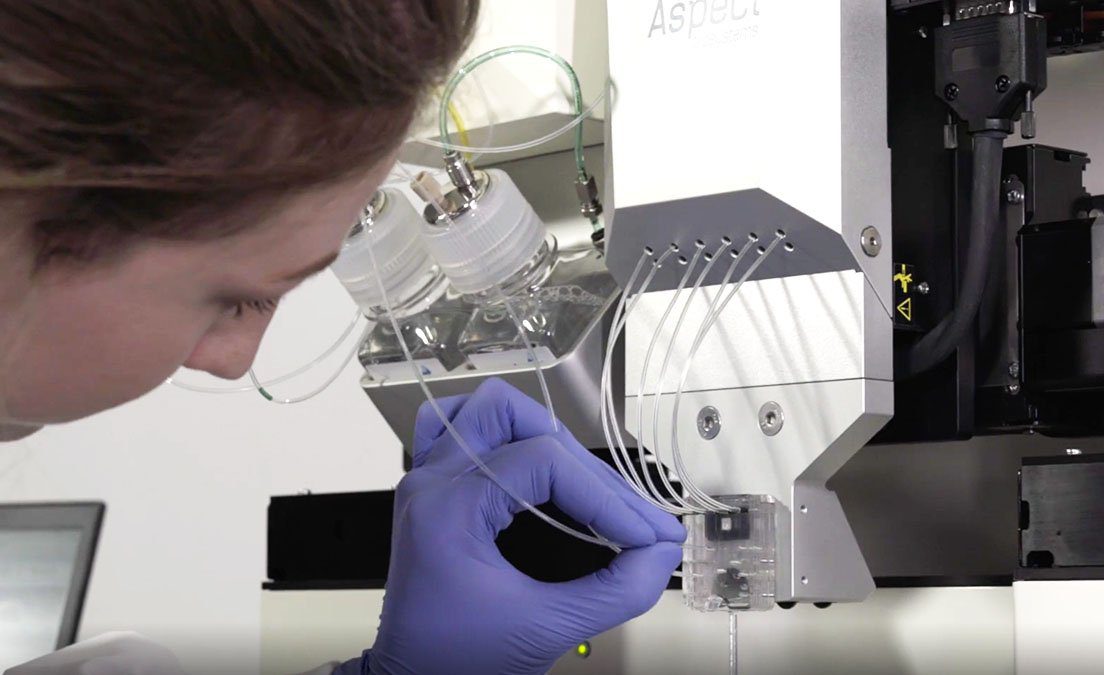 Aspect’s work in liver tissue is initially for drug testing, but it intends to use those learnings to create a future liver patch, or implantable tissue.

“That could be, for example, something that we use for people who have acute liver failure and are not able to obtain a liver transplant in time,” says Mohamed. “Maybe one day, we will provide our liver tissue transplant to get them through that two, three week period of acute liver failure until their liver recovers or they can get access to a liver organ. Or, in the future, printing something even more complex that could avoid even the need for a donor liver organ.”

The question of vascularization is always on the agenda in the 3D bioprinting area, and Mohamed explains that Aspect has a combinational strategy for this.

“With our microfluidic technology, we’re able to pattern in vascular-like networks, and then let biology do what it does best,” he explains. “We engineer the required systems and allow biology to come in and actually start to form the complete vasculature. We’re taking a functional perspective on things in the sense that the main function of vascularization is to provide nutrients to the cells to keep them alive, to provide all the oxygenation and for waste to be removed. And so we’re designing systems that allow us to do that from an engineering perspective as well as relying on biology for completion of that process.”

Aspect has seen rapid growth since its inception and now has a staff of around 40 people and over 20 partnerships around the world. Mohamed expects significant expansion over the next couple of years.

“We will be expanding our current partnership and partnership with the ultimate goal of getting these therapeutics closer to the clinic, and ultimately patients…”

“We’ll obviously be putting a lot of funding into moving our internal innovation programme forward as well as advancing our platform technology, and so a lot of investment will be going into R&D,” he says. “That will mean bringing on a lot of additional staff and working with experts to move the technology to a new level. We will be expanding our current partnerships with the ultimate goal of getting these therapeutics closer to patients in the clinic.”

“I think the amazing thing about the technology is that it’s going to get better and better as our understanding of biology advances. And so I think the applications are going to progressively get more complex and even more impactful and have a direct link to longevity.”

Harvard researcher proposes the Daphnia water flea as an alternative to worms for building a scalable platform for antiaging drugs research. In many ponds and...
Read more
Innovation

Discovery could have important implications for the health of aging brains and development of therapies for neurodegenerative diseases. Recent studies suggest that new brain cells...
Read more
Innovation

How to boost muscle regeneration and rebuild tissue

Melatonin shown to slow exhaustion of the ovarian reserve

Chinese researchers demonstrate that melatonin delays ovarian aging in mice by slowing down the exhaustion of the ovarian reserve. Previous studies have demonstrated that long-term...
Read more

Neurons and aging – putting the pieces together

Wind the clock back three years… in just eight weeks?