Taylor Swift once sung about “A Perfectly Good Heart” – well, now a team from Harvard University’s Wyss Institute has made their own, with a different sort of SWIFT.

The new technique – SWIFT (sacrificial writing into functional tissue) – was designed to tackle the shortage of organs needed to repair damaged, diseased or worn out body parts. Given the worldwide shortage of organs available for transplant (over 113,000 people are on the national transplant waiting list in the US alone [1]), the scientific community is turning increasingly towards manufacturing these organs in the lab, but using bio-components derived from the patient to ensure a compatible transplant that isn’t rejected.

Longevity. Technology: This novel approach shows a clever “less is more” attitude. Rather than trying to ramp up cell production, the Wyss/SEAS team have taken a strategic approach – printing the vital vessels that will support the living construct that is packed with organ building blocks. This could pave the way for the repair and replacement of of human organs with tissue grown from patient cells.

Here’s a video from the Wyss Institute that explains everything:

The TRL score for this Longevity.Technology domain is currently set at: ‘Early proof of concept demonstrated in the laboratory.’

The TRL score for the technology addressed in this article is: ‘Early proof of concept demonstrated in the laboratory.’

Advances in the field of 3D-bioprinting have been promising, yielding functioning tissues including bone, ovary and skin that could be used in a human body [2]. 3D-bioprinting has also begun to incorporate the printing of scaffolds that can be used to regenerate joints and ligaments [3], however, previous results have lacked the cellular density and organ-level functions necessary for organ repair and replacement [4].

The work done by the Wyss Institute and the Harvard John A Paulson School of Engineering and Applied Sciences (SEAS) could change that; their research overcomes this significant obstacle by 3D-printing vascular channels into living matrices made from stem-cell-derived organ building blocks (OBBs). This is able to produce viable, organ-specific tissues that have both a high cell density and function. 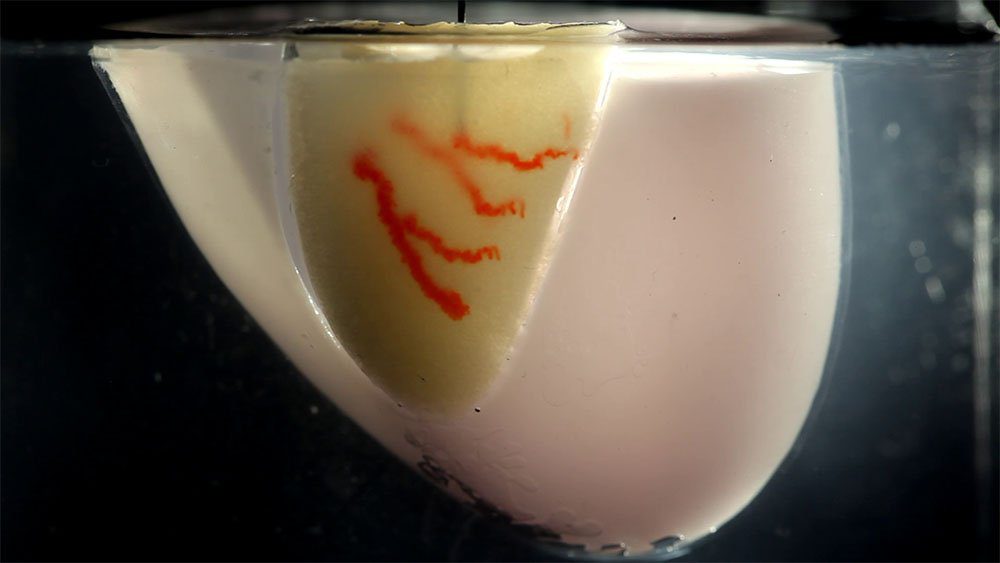 SWIFT cardiac tissue with branching vasculature – Image shows 3D embedded printing of vascular channels (red) within a cardiac tissue matrix, which replicates (at a 1:2 scale) the 3D CAD model of a normal human heart, including a segment of the left anterior descending (LAD) artery and a diagonal branch. Credit: Wyss Institute at Harvard University

Co-first author Mark Skylar-Scott told The Harvard Gazette: “This is an entirely new paradigm for tissue fabrication. Rather than trying to 3D-print an entire organ’s worth of cells, SWIFT focuses on only printing the vessels necessary to support a living tissue construct that contains large quantities of OBBs, which may ultimately be used therapeutically to repair and replace human organs with lab-grown versions containing patients’ own cells [5].”

The process starts by stem-cell-derived aggregates – hundreds of thousands of them – which are formed into a dense, living matrix of OBBs, rich in cells, approximately 200 million cells per millilitre. These aggregates are made from adult-induced pluripotent stem cells mixed with a specially-formulated extracellular matrix (ECM) solution. This living matrix is compacted via centrifugation and at cold temperatures (0°C to -4°C) has the consistency of mayonnaise. This makes it soft enough to shape and mould without damaging the cells, but thick and viscous enough to hold its shape. The researchers use a thin nozzle to deposit a strand of gelatin “ink” in the matrix, butting the cells out of the way without causing damage.

Heating the matrix to 37°C makes it stiffen like cooked egg and, at that temperature, the gelatin ink melts and can be washed out. This leaves a network of tiny channels behind that can be used to perfuse the surrounding cells with oxygen and nutrients. The team can also vary the diameter of the channels, and experiments showed that tissues created using SWIFT remained viable when other tissues without channels experienced core cell death within 12 hours. The team maintained a matrix of heart-derived cells for over a week and, during that time the cardiac OBBs fused together. This created stronger cardiac tissue that experienced contractions that were more synchronous and more than 20 times stronger, just like a human heart [6].

Wyss Institute Director Donald Ingber said of the research: “The ability to support living human tissues with vascular channels is a huge step toward the goal of creating functional human organs outside of the body.. [this research] ultimately has the potential to dramatically improve both organ engineering and the lifespans of patients whose own organs are failing [7].”

eGenesis' groundbreaking xenotransplantation work with Massachusetts General Hospital to be expanded through additional collaboration. eGenesis has announced it is expanding its research collaboration with the...
Read more
Agetech

Researchers use metformin to repair broken cell machinery and drastically lower dangerous inflammation. Inflammaging is one of the latest Longevity buzzwords; it has been around...
Read more
By Eleanor Garth
September 17, 2019
Facebook
Twitter
Linkedin
ReddIt

eGenesis' groundbreaking xenotransplantation work with Massachusetts General Hospital to be expanded through additional collaboration. eGenesis has announced it is expanding its research collaboration with the...
Read more

Longeveron announces Phase 2 clinical trial to evaluate the safety and efficacy of Mesenchymal Stem Cells (LMSCs) for the treatment of aging frailty in...
Read more

Unlocking the Longevity potential of our oceans

Biologist focuses on the coast of Oman to discover how extreme environments and oceanic life could provide sources for Longevity. With issues like climate change, overfishing...
Read more