Campisi Lab to partner with pharma firm on senescence

Levels of certain microRNAs indicate risk for cognitive decline. Researchers at the DZNE and the University Medical Center Göttingen (UMG) have identified molecules in the...
Read more
Longevity TV

Instead of papering over the cracks of declining fertility and the effects of menopause, what else can we do to help the longevity of...
Read more

Levels of certain microRNAs indicate risk for cognitive decline. Researchers at the DZNE and the University Medical Center Göttingen (UMG) have identified molecules in the...
Read more

Buck professor talks about taking the right approach to senescence, key indications, and forthcoming research and collaborations from her lab.

In our first article with the Buck Institute’s Judy Campisi, she spoke about the different approaches and the need for caution when it comes to developing senescence-targeting therapeutics. Today we bring you more from that interview, gaining more insight into her views on the sector and what her lab is working on today, including an exciting new collaboration on sarcopenia.

Longevity.Technology: From her base in the San Francisco Bay area, Campisi has a good vantage point from which to observe the recent growth in companies focused on developing senotherapeutics.

“In the whole Bay area there must be at least 50 companies working on some aspects of senescence, senolytics and senomorphics, so this is an extremely rich area of activity,” she says. “Of course, it’s also an extremely rich area, period, and there are all these Silicon Valley people who are convinced that they’re going to defeat death, and they invest in these companies. And yes, there are companies I think that are more cautious, funding their own research or other research, to make sure that they don’t make a mistake.”

Campisi highlights the work of Unity Biotechnology as an example of a company demonstrating good practice in the development of senescence-targeting drugs. Despite experiencing a clinical trial setback last year, the company has continued to advance other programs and recently announced positive data from its macular degeneration trial.

While still being credited as a “scientific founder” of Unity, she doesn’t consider herself to be a true founder of the company, which funded her research for a time.

“I did not found Unity Biotechnology – I’m not a business person – that is not one of my talents. They’re not funding my research anymore, but I still stay in touch. And I am impressed. I think the caution of those early days was a lesson well-taken, and I think that they’re moving correctly, doing things step-by-step, and even doing in-house research to make sure that they’re on track. So I think they’re doing well.”

Campisi feels that the time challenge facing companies when it comes to proving efficacy for aging itself cannot easily be overcome, so the current approach to testing senolytics against specific diseases and conditions is likely to remain in place.

“How do you evaluate whether something works as an antiaging drug?” she says. “That’ll take 20 years and no company can deal with that. But that’s not an FDA problem, that’s the biology. And this is a practical reason for why companies are going after very specific indications.”

Campisi has some clear ideas on where we are likely to see the first successes when it comes to targeting senescence. One area is osteoarthritis, despite Unity’s trial failure in this indication.

“Frankly, in my opinion, I think they didn’t wait long enough [to see results from the trial],” she says. “But I think osteoarthritis is a good indication to look at because there’s not a lot of leakage into the circulation, so there’s less worry about off-target effects.”

Another area of the body that Campisi thinks has good potential for senolytics is the eye, and her lab is doing independent research on this, with Japanese eye surgeon Dr Koji Kitazawa conducting a sabbatical in her lab.

“The eye is a privileged place – you don’t have to inject anything, and there are a lot of things you can add just topically,” she says. “We’ve been working on the eye for a year now, and Koji just got an extension of his fellowship. Another place is the skin, because it’s not easy for things to go from the external skin into your bloodstream. So again, kind of a privileged place. And of course, everybody wants to get rid of skin aging.”

“I tell my lab, if we cure heart disease and macular degeneration and Alzheimer’s, it’ll be great. But if we cure wrinkles, we’ll be rich!” quips Campisi.

So what can the world expect to hear from the Campisi Lab at the Buck in the near future? A key question the team is looking at revolves around the results of experiments performed in the lab, where genetically identical human cells are treated to induce senescence in 100% of the cells present. 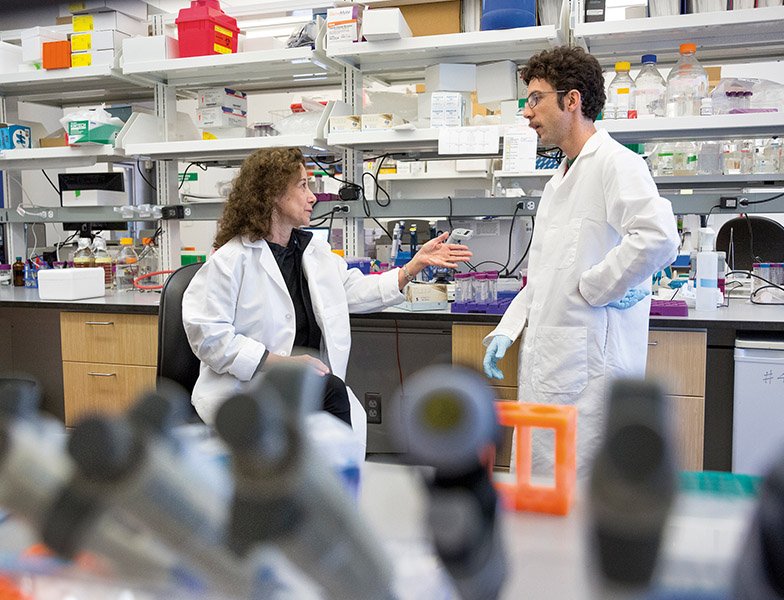 “We looked for the appearance of biomarkers of senescence, and there are quite a few,” says Campisi. “And the first thing we noticed is that not every cell in the senescent dish expresses every biomarker. So that was our first clue. Why are they different? What’s different between the ones that do and the ones that don’t?”

Beyond seeking the answers to these complex questions, Campisi also reveals that her lab is also collaborating with a “major pharmaceutical company” on the role of senescence in sarcopenia.

“They’re interested in senescence in the muscle,” she says, explaining that sarcopenia is both a major problem in aging, but also as a result of chemotherapy and some drugs for treating HIV/AIDS.

“Through work conducted in my lab, we know these drugs induced senescence in human cells. So the question then is, can we develop ways to identify which cells in a muscle might be susceptible to becoming senescent and then eventually eliminate those cells without eliminating others? We’ve shown in a mouse model that, by eliminating those senescence cells, you can improve muscle function, so we’re going to be funded by this pharmaceutical company to pursue the research.”

Campisi points out that working with big companies can have additional benefits to academics beyond funding.

When will senolytics be approved?

So does Campisi think a senescence-targeting therapeutic will be available any time soon?

“That’s sort of like asking me what the stock market will do tomorrow,” she says. “I think the field is early enough, that we should still be prepared for some surprises, and we don’t know what those surprises are right now.

“I think that in our lifetime there will be some kind of [approved, senescence-targeting] therapy. Maybe not a pill that you take every day, but one for specific indications. But, in the end, one thing I can absolutely guarantee is that we’re going die – I think there’s a lot of confusion between death and aging.”

Images courtesy of the Buck Institute

Ovarian longevity and the significance of ovarian aging is poorly understood – our video aims to change that. Join our Scientific Editor Daragh Campbell as...
Read more
Biotech

Ovarian aging – what women aren’t told about their health

Ovaries set the pace for aging and changing that pace could be the key to improving fertility, healthspan and lifespan. Words like fertility, menstruation, menopause,...
Read more
Biotech