With the recent explosion in direct-to-consumer genetic testing kits and services, the measurement of our functional or physical age may seem like a less exciting area of anti-aging science. But, in many ways, measuring functional age is potentially even more important to the work of Longevity researchers than other, less physiological, measurements.

Longevity.Technology: To understand if your interventions are working you need a baseline to work from, and to measure progressive stages with the same test, to identify biomarker adjustments. Biomarkers are moving from the lab into commercialisation and we see this is a trend that will continue and attract deeper investment. We talk with one such company that’s about to seek expansion funding.

Las Vegas-based start-up, Centers for Age Control, is focused on bringing functional age measurement into the digital age with its AgeMeter system. As we age, we experience a decline in several functions that are essential for the activities of daily living. The AgeMeter measures the most important of these, including memory, reactions, hearing, agility, decision speed, tactile sense and lung function.

By measuring such biomarkers of aging and comparing scores to norms by age and sex, the AgeMeter determines a person’s functional age for the tests, as opposed to their chronological age. Based on a tried and tested system for measuring key aging biomarkers, AgeMeter has already gained some high profile supporters, including Harvard University Professors George Church and David Sinclair.

“For PGP, supercentenarian, aging reversal studies, and everyday wellness, we need cost-effective, standardized, quantitative insight into a diverse set of physiological measures,” says Dr Church. “The AgeMeter can help us get there.”

We spoke to Elliott Small, founder of Centers for Age Control about the development of AgeMeter, and he explains that it all began following a chance meeting with the physiologist who developed a functional test system that measures 12 biomarkers of aging, called H-SCAN.

“Centers for Age Control eventually became the sole distributor of H-SCAN, and we were selling them around the world,” says Small.

In 2013, the inventor of H-SCAN retired, which turned into an unexpected opportunity for Small and his team. “He said if you want to go ahead and rebuild this and modernise it – do so with my blessings,” recalls Small.

Small himself is a graduate of Harvard University and over the course of the next couple of years managed to generate interest from Dr Church and Dr Sinclair by running discussion groups at reunions that looked at why Harvard University is a leader in aging reversal research.

“They became the catalyst for getting the AgeMeter project started,” says Small. “They put us in touch with someone from the Life Extension Advocacy Foundation, and they helped us to raise some initial money to get going.”

In 2017, Centers for Age Control worked with LEAF to raise some early funding through Lifespan.io, the organisation’s crowdfunding platform for anti-aging technologies. Small also supplemented that with his own money and approached his network of contacts to help bring AgeMeter to life.

“One of my college classmates at Harvard, who is now a gastroenterologist in Atlanta with three clinics, has got an age management program in his practice,” he says. “He and I had been talking back and forth for quite a few years about anti-aging ideas, and so around the time that I had prototyped the AgeMeter and was nearly finished, he came in as a financial partner, and that helped to keep things moving along.”

The AgeMeter was finally completed in 2019 and the company has only recently started shipping to its customers around the world.

The original H-SCAN system was a physical metal console, connected to a PC, along with a range of buttons, lights and connected devices for conducting the different physical tests. AgeMeter takes advantage of modern technology, presenting a virtual version of the console on a touch-screen tablet, along with four external peripherals for some of the physical measurements. 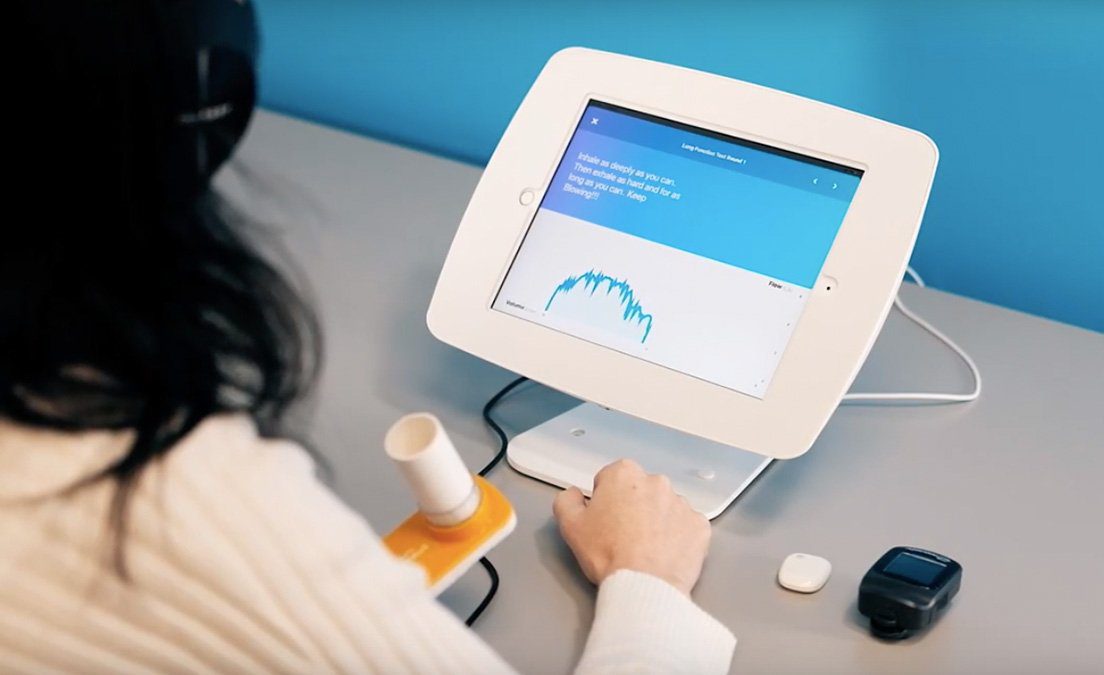 The AgeMeter software itself is built as an iOS app, which means that Centers for Age Control is able to take advantage of the ability easily to move software upgrades to every AgeMeter in the world. The system is currently set up to measure 12 biomarkers, but this will be expanded over time via software updates to include more.

“We’re also using a cloud-based database, so every time someone takes an AgeMeter test, the results are sent anonymously to that database, so the data that we have continues to grow over time,” says Small. “We will actually end up being a perpetual global aging study over time so that the calculation of functional age becomes more and more precise as time goes by and potentially we might have more data on each of the biomarkers we use than any study ever.”

Despite the obvious interest from aging and Longevity researchers, Small sees that the main market for the AgeMeter as being for healthcare providers and doctors to use with their patients and support better aging with informed advice on how to alter behaviours or lifestyles. The system would also provide doctors with another source of income, enabling them to charge a fee for each test.

“Later this year we also plan to introduce a consumer version of our software as an app,” says Small. “It won’t have as many of the tests – only the ones that can be done on the screens such as reaction times.”

With the AgeMeter now available, Centers for Age Control is now looking to bring funding into the company to help get it out there.

“We’re working at structuring the business to make it attractive for funding,” says Small.

0
Most of us are at home right now - what will it be like when we're older? And what is being done to improve...
Read more
Tissue/Organ

0
In these challenging times, with everyone working from home and conferences pushed-back to later this year, we had an idea: Longevity2020 While the world overcomes...
Read more
By Danny Sullivan
February 11, 2020
Facebook
Twitter
Linkedin
ReddIt

0
Talking prevention and treatments for Longevity with Prodrome's Dayan Goodenowe. Detecting prodromes – an early indication of a developing condition or disease – could revolutionise...
Read more

0
Start-up NemaLife evolves from platform technology to services provider to identify chemicals that have both positive and negative effects on Longevity. The use of the...
Read more

0
A world wide web that is partly biological has been created around the globe by collaborating scientists. New nanoelectronic device research has enabled both artificial and...
Read more

0
Most of us are at home right now - what will it be like when we're older? And what is being done to improve...
Read more