That’s all folks: do hard-wired biological constraints ensure aging (and death) is inevitable?

Modern medicine has done miracles for our longevity – we no longer have to fear the flu and die of infections that in most cases can be cured with antibiotics. Even within the current pandemic, we have developed vaccines, in record time, that have now greatly curbed the number of hospitalisations and deaths [1]. However, a new study has analysed age-specific birth and death data spanning centuries and continents and concluded that the trajectory towards death in old age has not changed, and that medical advances will be necessary before we can beat biology.

Longevity.Technology: With key medical breakthroughs, humanity has managed to extend life expectancy. While at the beginning of the 19th century it was close to impossible for anyone to live past 40 years of age, in 2015 the global UN estimate for life expectancy was 73 years. Yet, aging and aging diseases, the most common reasons behind cause of death, are areas that scientists are failing to tackle significantly.

As the rate at which life expectancy increases decelerates, people are beginning to question: is there a biological constraint to what age humans can live? Humans have shown that with an improved lifestyle and economical environment it is possible to live longer. Doctors can help overcome biological malfunctions of our bodies, but eventually science runs out of answers and aging and senescence catches up with us; currently, this is simply inevitable.

The ‘invariant rate of aging’ hypothesis states that the rate of aging within a species is relatively stable and thus cannot be affected by external factors. In essence, even with the ability to treat all maladies, each species can only live until its biological limit, excluding more sci-fi worthy scenarios.

Although no consensus has been reached about this hypothesis in the literature, “understanding the nature and extent of biological constraints on the rate of aging and other aspects of age-specific mortality patterns is critical for identifying possible targets for interventions to extend human lifespans, [2]” as well as better understanding animal preservation and evolutionary and demographic patterns.

There is a strong relationship between life expectancy at birth (LEx) and lifespan equality (LEq) in diverse human populations [3,4], the latter having strong correlations with measures of economic inequality. In most developed countries, deaths are concentrated at the tail-end of the lifespan distribution as majority of the population dies at an elderly age. This means there is a relatively high life expectancy, high lifespan equality and low lifespan variation.

“Amongst the mammal species, the risk of death is high in infancy, rapidly declines during the immature period, remains relatively low. Until early adulthood and then rises with age as a result of senescence [2].” The Siler mortality function mathematically describes this relationship (shown in the diagram below, figure1C) and was used in the study. 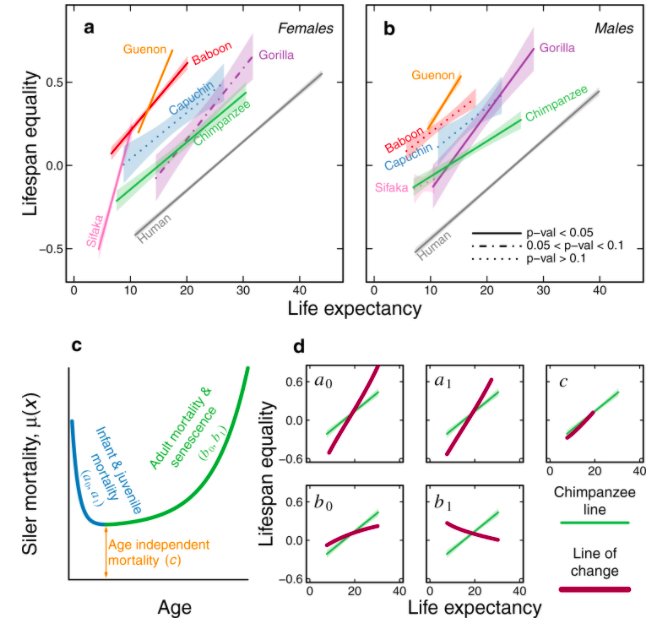 Without delving into the nitty gritty of the maths behind this, there are various mortality parameters that make up Siler mortality:  a0 and a1 drive infant and juvenile mortality, c is age-independent mortality, and b0 and b1 represent senescent mortality due to aging. b1 also reflects the rate of aging.

A global longevity research team set out to investigate the relationship between LEx, LEq and other mortality parameters, by fitting 39 combined data sets, comprised of 30 primate genera and 9 human populations, to the Siler function.

The literature can be contradictory when it comes to describing the LEx and LEq. Some state that LEx is independent from LEq [5,6]. Others find a linear negative relationship; as lifespan equality decreases, life expectancy increases in some human populations [7]. This study agreed with this finding an indisputable negative relationship in primates and humans.

To try to explain the linearity of the relationships, the parameters were varied to study what led to variation amongst populations, reflected by the slope. a1, a0 and c did not give a significant deviation from the obtained lines, but b1 led to a stark change in the direction of the line.

Similarly, through more mathematical modelling, the mortality parameters sensitivity on LEx and LEq were evaluated. Pre-adult (a0 and a1) and age-independent (c) mortality resulted in movement along the existing relationship line, but b0 and particularly b1 produced vectors almost perpendicular to the original relationship, describing collinearity. The mortality parameter manipulations are illustrated in the graphs above. (Figure 1d.)

Finally, the magnitude of the changes was considered and the parameters that govern infant and age-independent mortality changed orders of magnitudes more that those driving aging.

The authors comment: “Our results provide the most comprehensive support to date for the idea that observed variation in mortality patterns among populations of a given genus is driven largely by changes in pre-adult mortality [2].”

There is fresh insight and support for the ‘invariant rate of aging’ hypothesis. While the rate of aging (b1) does vary in primate and human populations, its effect and magnitude are far smaller than other mortality factors. If large changes in the rate of aging were to occur, there would be a shift of life expectancy and life equality.

“Life history theory predicts that among species with slow life histories (i.e. species with long lifespans, small litters and delayed maturity), adult survival should be buffered from environmental variability, while juvenile survival is expected to vary widely in response to the environment [2].”

This ‘buffering hypothesis’ is also supported by the study’s findings where the largest life expectancy changes occur solely due to changes in the young surviving. All of the results provide supporting evidence that there is a limit to how long humans can live. We are yet to see if novel medical advances can biologically overcome what evolution has not, in order for us to live longer and healthier.

Victoria Barros Metlova
Staff Writer Victoria is a DPhil candidate in Inorganic Chemistry working on biocatalysis of drug fragments with P450 monooxygenase mutants under the supervision of Professor Luet Wong, at Oxford. She researches and writes about longevity (when her dogs allow her the time!)

Striking for the summit of longevity research

Express yourself – an introduction to epigenetics

Finding out all about epigenetics – what it means, how it affects you, what you can do to change it and how TruDiagnostic's testing...
Read more
Features

Roll camera – longevity is stepping into the limelight. We find out more about Longevity Hackers. Last week we brought you the exciting trailer for...
Read more
Features