It’s all in the numbers; small sets of numbers

AI start-up NetraMark targets $3 million seed round while identifying that an exciting repurposing candidate has potential for indication expansion into Longevity.

“I won’t tell you stories about how I used to wake up as a child and not be able to see anything except numbers,” says Dr. Joseph Geraci, CEO of Toronto-based AI start-up NetraMark, which recently announced the extension of its collaboration contract with Longevity biotech firm Juvenescence.

But Geraci is definitely a numbers guy – with three degrees in mathematics, he’s made a career out of them. But from an early age he’s also had affinity for health and medicine.

“I always had an eye towards medicine to be honest, even though I’m a mathematician, I‘ve been intrigued by medicine since I was a kid,” he recalls. “I would walk around diagnosing people – like when I told my dad he had kidney stones. And I was right!”

He completed a mathematical physics PhD, split between the University of Toronto and the University of Southern California, which gave him a huge opportunity to work with some world class people. And despite opportunities to work with people from Harvard, MIT, Caltech and other places, Geraci went back to Toronto and joined Princess Margaret Hospital, where he won an award to do cancer work.

“A big part of my mathematics training was in network theory – understanding the complexity of networks,” says Geraci. “And when you think about cancer – it is a network disease, it’s a fault.”

And so Geraci did a postdoc in oncology and computer science, which led to an award from the Canadian government to do machine learning in biotech, “right before AI became sexy”. This led to another award, this time from Eli Lilly to do some neuro psychiatry work that also turned into a postdoc, and he was then drafted into an opportunity with the Ontario Brain Institute, to help out with a mood disorder programme.

After developing all this expertise, Geraci was sitting on insights that meant lots of people wanted to do business with him.

“I had opportunities because the algorithms are very generalizable, and people asked me to help them with things like predicting stock markets, cancer projects, women’s health and so on,” he recalls.

It was while trying to understand how to respond these opportunities that Geraci met his eventual co-founder Richard Brooks, a business lawyer and serial entrepreneur. Brooks gave him the support and perspective he needed and the two eventually decided to join forces and form NetraMark.

In 2017, they raised a couple of million dollars from angel investors in Toronto and beyond, including Jim Mellon and Greg Bailey, who at the time were still forming the Longevity focused life sciences company Juvenescence. The investors saw something in Geraci’s work and they believed that NetraMark had significant potential.

“I had essentially built this technology that was really amazing at discovering subpopulations that I never even knew were there,” explains Geraci. “The big breakthrough came when a group out of California gave me some Parkinson’s data and the tech was able to start understanding things that were cutting edge without me knowing it. I didn’t have any expertise in the area, so I found that my computer was teaching me.”

But the technology was raw and unrefined, so the seed money was used to build a more usable, stable platform that doctors and machine learning people and scientists would want to work with.

“So we built this beautiful interface called NetraAI,” says Geraci. “It allows you to interact with complex patient models and the machine can explain what’s going on within certain patient subpopulations.” 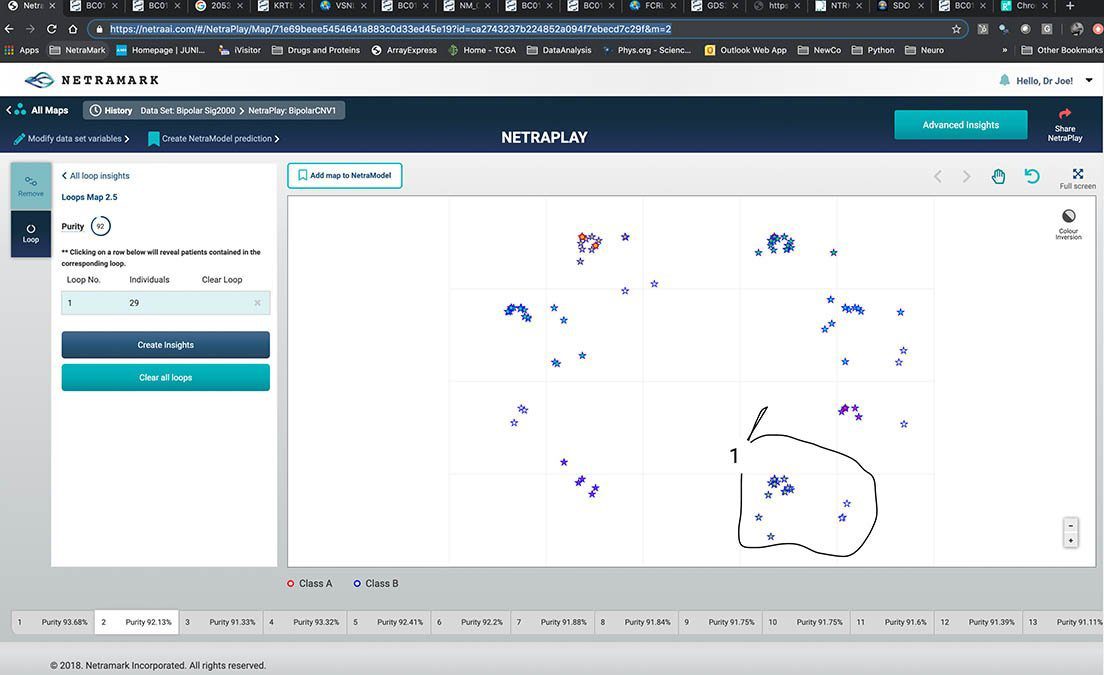 The second objective on the company’s roadmap was to develop something called the NetraHealthAtlas, which looks more broadly at disease-specific data to understand how disease states should be defined, and offer potential ways to treat them.

“For example, we just fed it low grade brain cancer data just a few weeks ago,” says Geraci. “And what the machine does is churns through the data and starts understanding the different subpopulations and suggests ways you can treat them with drugs.”

The use of AI in life sciences and drug discovery is already a widespread practice. Indeed, companies like Insilico, which is also working with Juvenescence, are very successful in leveraging AI to learn about the biochemistry behind drugs. So how does NetraMark set itself apart?

“… the way we distinguish ourselves is being able to understand the heterogeneity within even small samples of patients.”

“We’re not interested in designing the drug,” says Geraci. “We can work with people like Insilico, who can design a new drug, but what we do is different. We come from the premise that something like aging, or Alzheimer’s for example, is totally ill-defined – it’s people trying to hit 14 different targets with one dart. Impossible. So, the way we distinguish ourselves is being able to understand the heterogeneity within even small samples of patients.”

NetraMark is able to look at the very expensive but small datasets collected in early stage clinical trials, and extract well-defined subpopulations, what’s driving them and what companies can do with them.

“We actually create a new taxonomy for these for these groups,” says Geraci. “We’re redefining the way we define disease.”

Geraci was recently introduced to Howard Federoff, a scientist and doctor who has collected significant data on SuperAgers – someone in their 80s or older who exhibits cognitive function that is comparable to that of an average middle-aged individual. Federoff has received millions of dollars in grants to explore the differences between people whose brains don’t age and those who age normally and those who transition to dementia.

Geraci showed him what NetraMark had been able to do with Alzheimer’s data already and Federoff was interested. Interested enough to share some of his data on SuperAgers to see what the tech could come up with.

” … one of the things it told us. It told us that we should give the normal agers rituximab. This is fascinating because doctors figured out through observation that if a stroke victim is on rituximab, their chance of having dementia is lower.”

“We put in the SuperAger data versus a normal ager, and the machine starts giving us these results after about 15 minutes,” says Geraci. “And this is one of the things it told us. It told us that we should give the normal agers rituximab. This is fascinating because doctors figured out through observation that if a stroke victim is on rituximab, their chance of having dementia is lower. And the reason is the that the rituximab is protecting the person against their own immune system. So it suggests that the immune systems of these SuperAgers are cooled down. I don’t want to give my mother rituximab, but it hints at something powerful, and we think we found it.”

NetraMark plans to publish the outcome of this work in the near future.

“We want to show that machine learning, in the right format, can really extract some amazing value from all of this data that’s out there,” explains Geraci. “And also, that things like longevity and cognitive aging can actually be impacted – we just need to change our attitude about the way we see and define these things.”

A key focus for NetraMark has always been on psychiatric conditions, but the company has more recently focused on areas like aging and cancer.

“… there has been so much demand from these biotech companies who are trying to bust into longevity and cancer.”

“Psychiatric trials suffer horribly – especially mood disorders, where I have a particular expertise, and we discovered that our system was really great at understanding placebo response,” explains Geraci. “And this area is still very important to us, but it’s very conservative and there has been so much demand from these biotech companies who are trying to bust into longevity and cancer. So it’s been a business decision to move into these areas.”

The company is now focused on raising additional seed funding to help the company become self-sustaining ahead of a Series A.

“We’ve been so focused on the science, and on the technology, and we’ve done a great job,” says Geraci. “But what we need to do is to build a portfolio of assets and start generating monthly revenue with the technology that we have. So that’s why we’re raising right now.”

Having raised $1.65 million in the initial round, Geraci hopes to raise approximately $3 million by April 2020 to complete NetraMark’s seed funding, with a Series A planned in 18 months or so.

“We’re not making a crazy valuation jump – we don’t believe in massive inflation,” says Geraci. “We’re mostly focusing on angel-types at this stage. We need to just focus on executing perfectly around what we’ve got and if we do, we’ll be ready for a nice, strategic, Series A.”

Over 45 confirmed speakers for this 5-day online event and a big thank you for your interest. We're moving fast! Longevity 2020 started just over...
Read more
Diet

We speak with GRG's Johnny Adams, a key contributor to the Longevity2020 online conference, about his quest for more healthy years. One of the speakers at this month’s...
Read more
Indication expansion

We speak with GRG's Johnny Adams, a key contributor to the Longevity2020 online conference, about his quest for more healthy years. One of the speakers at this month’s...
Read more

We speak with a key contributor to the Longevity2020 online conference about biological aging. UK start-up AgeCurve is focused on the measurement of aging and...
Read more