Longevity investment 2021: from Seed to SPAC

Bezos, Angermayer, Greve, Khosla, a16z… our Editor in Chief takes a spin through some of the longevity investment highlights of the year.

Following yesterday’s news about Korify Capital’s $100 million longevity fund, I thought it would be a good time to reflect on what has been quite a year for investment in our growing sector. From huge new funds and mind-boggling Series C rounds, to a host of exciting early stage investments and innovative new ways to fund longevity research, 2021 has been a fascinating ride from a longevity investment perspective, with more than $2 billion flowing into the sector in the last 12 months.

While the Korify fund is certainly exciting news, it’s only one of several longevity related funds to be announced in 2021. Earlier this month, Apollo Health Ventures successfully raised a $180 million venture fund to build a portfolio of data-driven biotechnology and health tech ventures aimed at extending human healthspan, while October saw Switzerland’s Maximon announce the launch of its $100 million Longevity Co-Investment Fund. Significant funding for the longevity field was also promised by German billionaire Michael Greve, who earmarked €300 million for rejuvenation startups, and by the newly formed Longevity Science Foundation, which committed to distributing more than $1 billion over the next 10 years.

2021 certainly seemed to be the year that billionaires really started taking longevity seriously, with funding from internet shopping mogul-cum-spaceman Jeff Bezos reported to be behind the launch of biological reprogramming startup Altos Labs. And in March, German investor Christian Angermayer teamed up with David Sinclair and Peter Attia to announce a $200 million biotech SPAC, which we can assume will have a longevity focus, although we’re yet to learn what the details of that will be.

Now let’s take a look at this year’s deals. 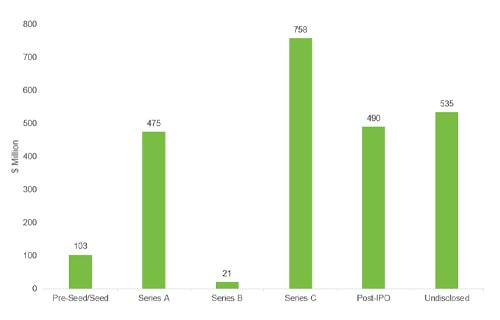 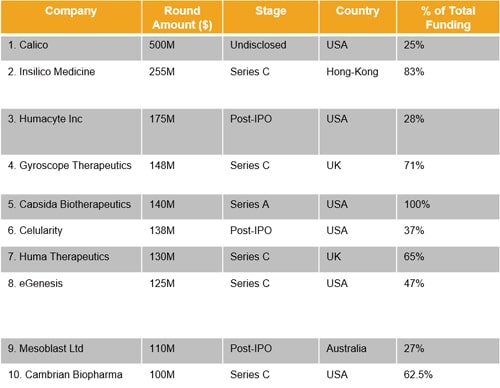 But 2021 hasn’t only been about megabucks. Much of our sector can still be primarily considered as early stage, and many of the investors supporting companies at this stage are individuals like Sonia Arrison, who told us what drives her as a longevity investor.

The year kicked off with R42 Group’s announcement of a $14 million fund for seed investments in longevity ventures. The fund almost immediately announced its first investment in mitochondrial transfusion startup Mitrix, and has gone on to make several interesting investments throughout the year.

Other interesting seed rounds include SENISCA’s £1.3 million for the development of senescence-reversing interventions that target both disease-causing and aesthetic aspects of aging, and the $7 million raised by digital health company Bold led by Silicon Valley investment giant Andreessen Horowitz. More seed-level Silicon Valley interest was also demonstrated by Khosla Ventures, which invested in Turn Biotechnologies and its novel RNA medicines for untreatable age-related conditions.

Moving into the more serious funding rounds, 2021 has given us a wealth of exciting investments to reflect on. From Fauna’s relatively modest $9 million Series A, to Insilico Medicine’s eye-popping $255 million Series C, we’ve also seen everything in between. Here’s a selection of some interesting deals:

The summer sun shone brightly on Assured Allies, an insurtech company working on evidence-based successful aging, which closed an $18.3m Series A in July. With its primary focus on dog longevity, Loyal announced a sizable $27 million round in September as it bounds eagerly towards clinical trials. In October, Rejuveron announced it was leading a Series B round of €15.7 million in Rejuvenate Biomed, which develops novel combination drugs for age-related diseases. And just last month, longevity biopharma Fountain Therapeutics announced it had secured an additional $15 million funding round, bringing its total Series A funding to $26 million.

One of the most interesting aspects we’ve seen in the longevity investment space is a clear interest in finding alternative approaches to fundraising. Crowdfunding remains an option for early stage ventures seeking funding outside of the traditional investment channels, as demonstrated by Gerostate Alpha, the Buck Institute incubated start-up, which cruised through its minimum funding target of $300,000 with weeks to spare.

But it’s the blockchain that perhaps leads to the most interesting new developments in funding longevity. We were excited to see the emergence of open platforms like VitaDAO, which aims to accelerate longevity R&D through community-governed and decentralized drug development, and which raised more than $5 million at its genesis auction.

And there has also been a strong crypto-flavour to this year’s longevity investment buzz, as the crypto community gets behind research and technology that targets aging. Angel Versetti, founder of crypto-conglomerate Moon Rabbit, told us that he aims to “spur innovation, growth and monetisation of the longevity industry, especially its radical and experimental niches that may lack access to traditional funding and support.”

The SENS Research foundation was one to benefit from this trend, raising more than $20 million (four times its annual budget) in just two days with the support of HEX founder Richard Heart and his new currency, Pulse.

This year, there’s also been a lot of buzz around the Hevolution Foundation, a Saudi-backed non-profit that will “provide investments in biotech to incentivize healthspan science across disciplines and borders.” Details are still sketchy, but with apparently around a billion dollars at its disposal and Life Biosciences’ Chairman Mehmood Khan at the helm, we look forward to bringing you more news on this in the new year.

Phew, it’s almost 2022 already – what else will the year ahead hold? More billionaires joining the longevity biotech race? A successful Phase 3 longevity trial? A Juvenescence IPO? You know there’s only one place to find out… stay tuned!

R&D project by Cytosurge and the Laboratory of Biosensors and Bioelectronics at the Swiss Federal Institute of Technology receives funding from Innosuisse. Cytosurge, a provider...
Read more