For thousands of years, doctors and indigenous healers have treated disease by adding molecules to people’s bodies in the form of pharmaceuticals, herbs and nutrients. Today a pioneering nanomedicine company is taking a very different approach.

NaNotics of Mill Valley, California, is building subtractive nanoparticles called NaNots to deplete pathogenic targets from the human body – without adding molecules. NaNots are biochemically programmed to absorb pathogenic targets and then excrete them from the human body. They can be programmed to absorb specific targets that drive diseases ranging from cancer to sepsis to aging. NaNots can be thought of as the world’s smallest, most specific, biocompatible sponges.

Longevity.Technology: NaNots are a novel Longevity platform. These nanoparticles measure 120 nanometers. For comparison, a DNA strand measures 1 nanometer and a red blood cell measures 7,000 nanometers. NaNots can be programmed to capture immune inhibitors that protect senescent cells and clear them from the body. NaNots can also be programmed to deplete inflammatory molecules secreted by senescent cells which are central to inflammaging which is believed to accelerate biological aging and drive many age-related diseases.

“I’ve been super-excited about NaNots ever since Lou explained them to me, and I’m delighted that NaNotics is being appreciated so widely as one of the most groundbreaking companies in the burgeoning rejuvenation sector. It’s terrific to be working with Lou and his team on a collaborative project.”

A key part of the development process for new therapeutics is to demonstrate that they are shippable and usable by teams other than the original developers. Scientists at these prestigious research centers will help NaNotics achieve this milestone by demonstrating that NaNots can deplete senescent cell protectors from the serum of elderly mice, followed by in vivo tests of NaNots as senolytics in elderly mice. These studies will bring us much closer to the ultimate goal of treating aging and age-related disease in humans.

Subtractive nanoparticles like NaNots are a Third Wave treatment. The First Wave – which includes older drugs such as chemotherapeutic agents – focused on killing bad cells. Although such approaches can be beneficial, they can also cause serious side effects, secondary malignancies and serious immune system damage due to the many similarities between “good” and “bad” cells. Second Wave treatments stimulate immune cells to treat inhibitory diseases like cancer. For example, checkpoint inhibitors – the largest oncology drug class – can sometimes induce regression by blocking the “off switch” on killer T-cells. However, such drugs often disrupt the immune balance, leading to autoimmunity. As it turns out, that “off switch” on T-cells plays a critical role in maintaining healthy immune balance.

Third Wave treatments like NaNots do not target cells. They target abnormal molecular signals that flow between cells – especially signals to and from immune cells. For most diseases, the problem is not bad cells or tissues, nor a weak immune system in need of stimulation. Most non-genetic diseases are driven by abnormal signals between cells that either induce dysfunction directly or defend bad cells by blocking immune-mediated destruction.

These NaNots will also have utility in treating multiple inflammatory diseases – including sepsis, the greatest unmet medical need on the planet…

Inflammation driven by senescent cells sets-up a positive feedback loop by activating the innate immune system, which in turn releases additional inflammatory cytokines. NaNotics is developing NaNots against three key inflammatory cytokines – TNF-α, IL-1β and IL-6 – which are central to inflammaging. These NaNots will also have utility in treating multiple inflammatory diseases – including sepsis, the greatest unmet medical need on the planet – without the side effects of existing antibody drugs. The fact that NaNots are being developed against major diseases will facilitate regulatory approval and subsequent use as anti-aging therapeutics.

NaNots have been developed against mouse TNF-α and tested in a mouse model of a TNF-driven cytokine storm. Mice were injected with a lethal bolus dose of TNF-α, resulting in the death of 7 of 8 control mice in 24 hours. Then mice were injected with NaNots against TNF-α a minute after the dose of TNF-α. In this test, mortality dropped to 5 out of 8. When NaNots were injected one minute before the dose of TNF-α, mortality dropped further to 3 out of 8. A bolus dose of TNF constitutes a “worst-case scenario” experimentally because the NaNots only have seconds to capture their targets; in sepsis, inflammatory cytokines rise over a period of several days. In aging, these same cytokines rise over a period of years.

Many of the things drugs do, NaNots can do faster, with little or no toxicity. They can also deplete certain “undruggable” targets as well. The world’s scientific literature is filled with data on pathogenic soluble targets that cannot be treated effectively with antibody drugs. The NaNotics team relies on peer-reviewed, third-party scientific studies to identify and prioritise targets for NaNot development. 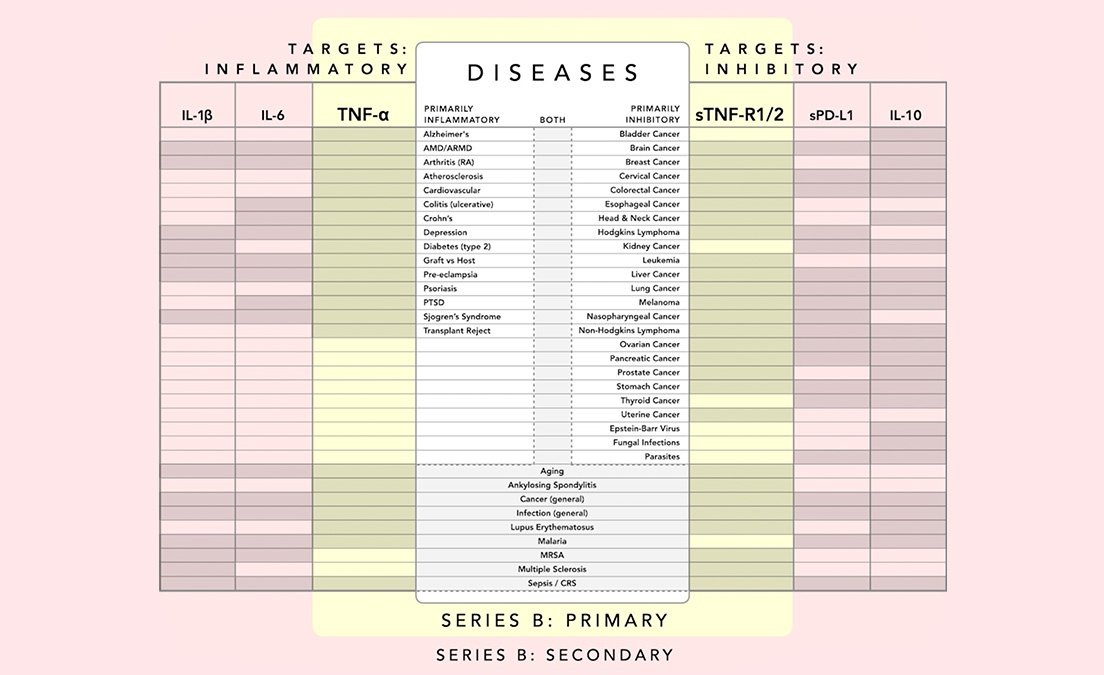 This graphic shows six priority NaNot targets and the diseases they drive or enable. The three targets on the left are inflammatory; the three on the right are inhibitory (i.e. they inhibit immune function). Four of the six are centrally involved in aging and age-related disease.

Developing NaNots against new targets is projected to involve a shorter development process than conventional drugs – which require extensive iteration to achieve an acceptable “therapeutic index”, the ratio of the quantity of the agent that causes the therapeutic effect to the amount that causes toxicity. Drugs are generally “pleiotropic” (from the Greek, “many turns”) meaning they have multiple effects – good and bad – because the targets that they bind have different roles in different parts of the body. NaNots by comparison are monotropic. They only do one thing: deplete the soluble pathogenic target they are programmed to deplete – only in circulation, never on cell membranes or in tissue. Specificity to soluble, circulating targets makes NaNot behavior very predictable and very safe, significantly reducing the number of iterations required to achieve an acceptable therapeutic index.

In pre-clinical studies in mice, NaNots cleared up to 98% of their targets in less than 5 minutes after injection…

NaNots are capable of depleting targets from circulation extremely rapidly.  In pre-clinical studies in mice, NaNots cleared up to 98% of their targets in less than 5 minutes after injection. In mouse models of triple negative breast cancer – refractory to virtually all treatments – depletion of soluble tumour-generated immune inhibitors blocked metastasis. It’s known from third-party studies that senescent cells secrete the same immune inhibitors that cancers employ, implying that depleting these inhibitors should clear senescent cells as well. NaNots themselves are then cleared naturally by macrophage phagocytosis, within about an hour. This very rapid target depletion and NaNot clearance will enable extremely precise and safe interventions.

NaNots are expected to be relatively free of the side effects that plague traditional pharmaceuticals because they are shielded against interactions with cell surface proteins – one of the main causes of drug side effects. Researchers have seen no evidence of toxicity in mouse or rat studies, even at 100 times the planned clinical dosage.

Another big advantage of NaNots compared to conventional drugs is that with NaNots, the disease marker is also the target of the therapeutic. There’s a major push currently in healthcare to identify measurable markers that can be paired with therapeutics, to improve drug selection and dosing and thereby enhance efficacy and reduce toxicity. This is difficult to do in practice because these markers are usually several steps removed from the molecular mechanisms of the drug. However, the targets that NaNots are programmed to deplete can be quantified precisely before and after treatment – providing useful information on disease status as well as NaNot selection and dosing – using existing ELISAs or bedside lateral flow immunoassays. The highly quantitative and predictable nature of NaNots relative to their targets will enable not just more precise dosing but also much tighter integration with new clinical AI systems than is possible with drugs.

NaNotics has raised $12 million+ to date. $1.5 million is currently available out of a $5 million bridge round toward a planned $60 million Series B. NaNotics is in currently in diligence with multiple pharma venture funds for this Series B, which will be used to complete preclinical & IND-enabling studies, and to conduct a first-in-human study of NaNots in oncology in Q1, 2023.

Margaretta Colangelo serves on the advisory board of NaNotics, the company profiled in this article.

Margaretta Colangelo
Managing Editor Margaretta Colangelo is a native San Franciscan with over 30 years of experience working in the software industry in Silicon Valley. She has been at the forefront of emerging technologies throughout her entire career and has a deep and multifaceted understanding of business, science, and technology, and is highly adept at tracking and forecasting innovation in technology.

Margaretta serves on the advisory boards of the AI Precision Health Institute at the University of Hawaii Cancer Center, Ageing Research at King's (ARK-AI) at King's College London, NaNotics, First Longevity, Robots Go Mental, and on the Board of Directors of the Bring Hope Humanitarian Foundation.

A long-awaited AI approach can now be implemented in screening for anti-senescence drug candidates. Developing a novel therapeutic drug can cost between $161 million and...
Read more
Senolytic drugs