AI firm Lapetus targets the face as a biomarker of aging: one simple picture can open-up a host of opportunities and implications. Wow.

Named after the Greek god of mortality, Lapetus Solutions is leveraging the power of facial recognition and AI to the world of Longevity. The North Carolina company is building analytical solutions for life insurance, life expectancy and wealth management that use the face as a biomarker of aging.

Longevity.Technology: The longevity sector is alive with companies using AI for all kinds of interesting initiatives, but Lapetus caught our eye with its approach to measuring human aging through nothing more than a selfie. The implications of your insurer making important decisions based on the photo you provide are manifest: we spoke with the company’s co-founder and Chief Data Scientist Karl Ricanek to find out more.

Ricanek is a PhD in computer science, with a particular speciality in facial analytics, a subject in which he holds multiple patents. He is also a professor at the University of North Carolina Wilmington, where he is the director of the Institute for Interdisciplinary Identity Sciences. The origin of Lapetus stems from a presentation given by Ricanek’s co-founder Jay Olshansky, a professor of gerontology at the University of Illinois at Chicago. Olshansky is credited as a founder of the field of biodemography – the merging of multiple sciences for the purpose of explaining why people live as long as they do.

“About 10 years ago, Jay was giving a talk to a roundtable of CEOs at large life insurance companies,” recalls Ricanek. “He was saying that, from a public health perspective, we have a lot of tools that can more accurately produce life expectancies, more accurate than what they’re doing currently within the life insurance industry.”

At that time, the life insurance industry was typically using blood analysis – looking for signs of cancer, large inflammation or other indicators – and coming up with models for life expectancy based on the blood work.

“Jay was showing some pictures of centenarians and supercentenarians, and he showed pictures of these centenarians’ children,” says Ricanek, pointing out that many of them looked 20 years younger than their actual age. “It’s been deduced that this means that these individuals are biologically aging slower. And so, what Jay was able to show, and what science has been showing, is that there are these indicators on the face that present themselves for long-lived individuals.”

“It’s about understanding your origins, your genes, those things that are just innate in you.”

One of the CEOs present that day challenged Olshansky that, if he was certain that this kind of analysis was possible, then he should “go out and build it”. Taking up the challenge led Olshansky to approach Ricanek to find out more about his work on facial analytics that extract more meaningful information from the face than just identity.

“It’s about understanding your origins, your genes, those things that are just innate in you,” says Ricanek. “So it was natural that we would look at the components of the face to understand biological age, or what we’re now calling in our product, our ‘senescing rate.’ This is the rate at which you’re aging, and it can be faster or slower, or normal. So if you are senescing slower than normal, it basically means that you are likely to live longer than average. If you’re senescing faster, then you’re likely to live shorter.”

Lapetus was founded in 2015, and its first facial analysis product, Janus, is designed to be integrated into the online application process for life insurance, taking a single “medical selfie” and returning accurate gender, age and BMI estimates. The senescing rate feature has not yet been released, but it is planned for launch early next year. 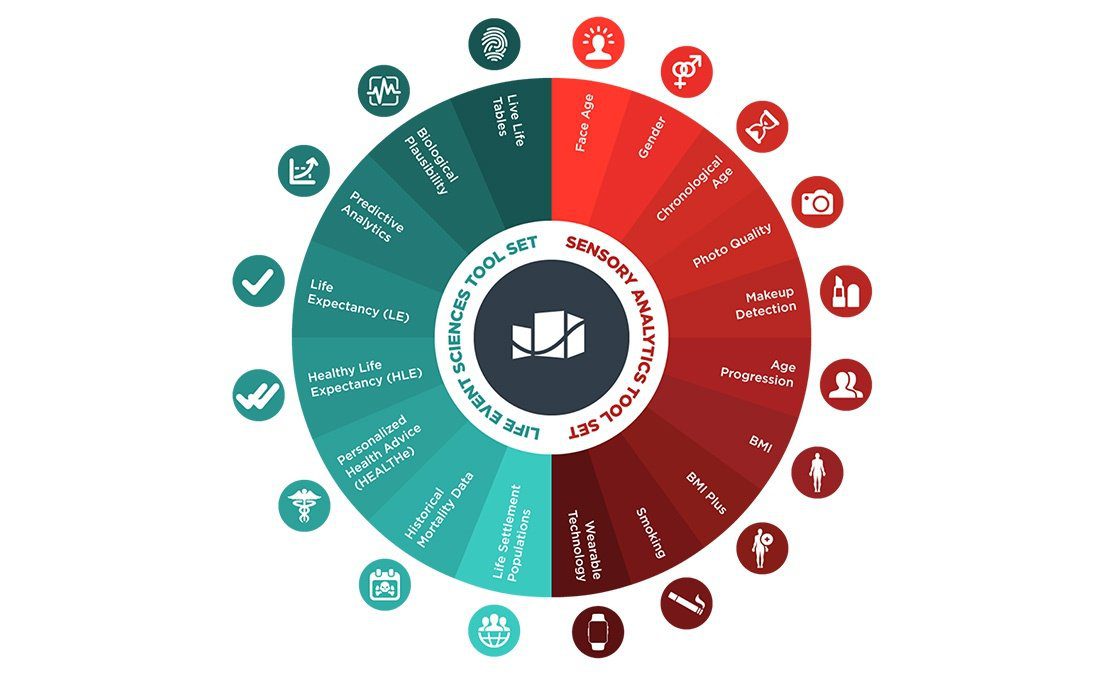 “In as little as 60 seconds, possibly two minutes, we will be able provide information about your senescing rate, all of your demographic data, we can derive your BMI, we can look at smoking status,” says Ricanek, adding that the company is also working on being able to assess someone’s predisposition to chronic disease.

“Before we were able to do blood tests as cheaply and as fast as we can today, doctors were trained to evaluate a patient through observation, and their primary key observation point was the face,” he adds. “But doctors are no longer trained in this fashion – they’re trained to get bloodwork, so that art of being able to assess through observation is lost because they’re not trained that way. We have revived that art and made it a science using very sophisticated artificial intelligence.”

“The ability to extract this information from faces not easy, and I’ve been working in this space for 30 years,” he says. “I just happened to be evolving this understanding of the face as a window into our lifestyle and our genes, and I started to look for the signals 10 or 12 years ago. Only now are we getting to the point where the artificial intelligence, the hardware, and the ability to scale it up using cloud technology, has presented itself in such a way that we can solve these really challenging and, before now, just intractable problems.”

“When you blend all of these things together, we can give you a more detailed picture of your life expectancy and your potential for chronic disease.”

While Lapetus started out with a predominant focus on life insurance, it is now extending its focus to additional areas, including Longevity risk, life expectancy, medical underwriting and wealth management. In addition to its facial recognition technology, the company is also adding other elements, including sensory analytics that assess data from activity monitoring devices, and a saliva-based genetic test called the “Generian panel”, which looks at genes associated with Longevity and chronic disease. Ricanek is also keeping an eye on other developments in the measurement of aging, such as DNA methylation, as they “become efficacious for real-world use.”

“When you blend all of these things together, we can give you a more detailed picture of your life expectancy and your potential for chronic disease,” says Ricanek. “We haven’t done the blending part yet – but that’ll come next year.”

Lapetus is pretty well funded, having secured “roughly eight or nine million” to date, according to Ricanek, and is already generating revenue through channel partners, including platform providers in the life insurance and wealth management sectors. The company is backed by investors including SixThirty and Plug and Play, and is looking to raise a Series B round later this year, with the goal of taking the company through to profitability.

We are very intrigued by this tech: its implications are quite significant in that the company is already revenue generating in the life insurance sector.

Comprehensive biomarker tech: Invest, buy, or both? It's time to have your say on Jinfiniti. We like what Jinfiniti are doing; but that's just our...
Read more

Hereafter is turning dead ends into conversational opportunities. Understandably, we use Longevity in a mostly physical sense - extending lifespan and healthspan and combating aging...
Read more