The Buck’s Judy Campisi talks cellular senescence, the different approaches to targeting it, and the need for cautious R&D.

Cellular senescence – it’s a complex subject. Senescent cells prevent early life cancer and produce molecules that promote tissue repair and regeneration. However, because they accumulate with age, they also eventually cause tissue degeneration, chronic inflammation and many age-related diseases. But why? It’s time to learn more about this important and potentially world-changing area of biotech development.

Longevity.Technology: Hot on the heels of the launch of our new market report on senotherapeutics, we bring you the views of one of the leading scientists in the field of cellular senescence. We caught up with Professor Judith Campisi at the Buck Institute for Research on Aging to find out more about her views on the field.

Coming to the study of aging through her initial research work in cancer, Campisi became convinced that cellular senescence was, ironically, also an important contributor to cancers later in life.

“The dominant view in the field for a long time was that senescence might have something to do with aging, but mostly because we were running out of cell divisions,” says Campisi.

Another mystery in the field was that it was very rare to find senescent cells in vivo in human tissue – only a small percent of the cells were ever present.

“So how could the cells be driving aging if there’s just a few percent of them?” asks Campisi. “Our contribution was the realisation that the cells just don’t stop dividing, they turn on a programme where they’re transcribing new genes and secreting new factors, and we realised one senescent cell can have a field effect in the surrounding tissue.”

Her work in this area resulted in the discovery of the so-called senescence-associated secretory phenotype (SASP) – a mix of bioactive molecules released by senescent cells, some of which promote chronic inflammation, a key driver of age-related disease.

Why does cell senescence happen?

So why on earth did we evolve such a complicated response to stress and damage? Campisi says that the simple explanation is that humans have evolved to remain healthy up until they have made babies. That’s roughly about 40 years of age.

“For 99% of our evolutionary history, there was no aging, there was no cancer, there was no osteoarthritis, nothing,” she says. “Why? Because most people died of infection, predation and starvation. Then along comes our human brain, and we change our environment. So we’re stuck with this evolutionarily selected phenotype that was not designed to keep us healthy, beyond the age of 40 or so. Therefore, we have to think of senescence as an evolutionary balancing act.” 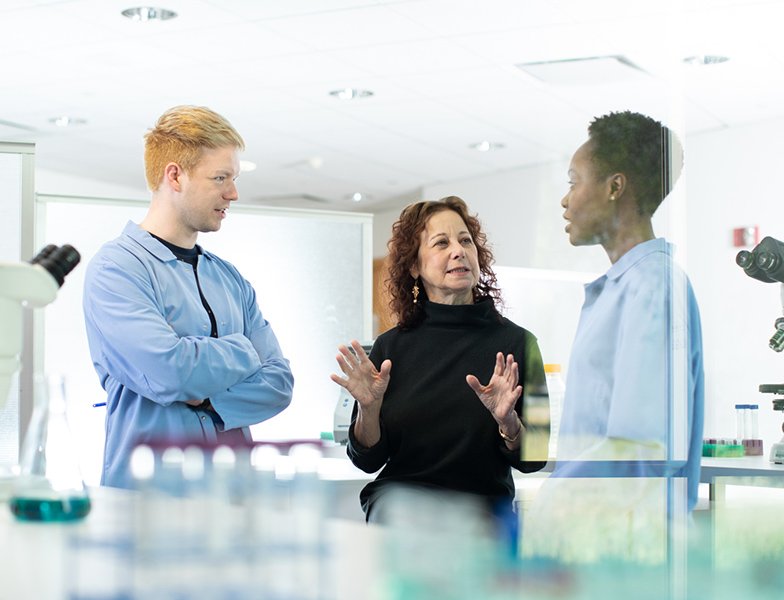 When it comes to the key approaches to targeting cellular senescence, Campisi highlights what she calls the two “main classes” – senolytics, which kill senescent cells but not their non-senescent counterparts, and senomodulators (or senomorphics), which are designed to suppress some of SASP secretions.

“The key difference between those two classes of drugs is, if you take a senomorphic, you can suppress some but not all of the secreted factors, but as soon as you take the drug away, the cells start secreting again, so you have to take a senomorphic most of the time,” she says. “Whereas with a senolytic, we know that you can administer it for a short period of time and then you can take it away, and it takes time for those senescent cells to build up again.”

Campisi is a fan of the latter approach, called intermittent dosing, which means a patient doesn’t have to be under constant pressure from a drug.

“I think there is enough downside to senolytics that constant pressure from that drug would probably not be a good idea,” says Campisi, pointing to the fact that senescent cells appear to play a role in many key functions, such as birth timing and wound healing. “You just can’t take these drugs every day.”

The need for caution

While great progress has clearly been made in the field, Campisi feels there is still a long way to go, and many unanswered questions have yet to be answered. One such question centres around observations in the lab that the senescence response is heterogeneous – that is, not every cell responds in the same way to a senescence-inducing stimulus.

“So the first question we want to know is, are these different cell populations good or bad, or both?” she says. “We just don’t know. We definitely want senolytics that hit the bad guys, and not the good guys – and we don’t have that yet. We don’t have that at all.

“The second thing we want to ask is, are they stable, do they always express the same genes? The answer to that, based on some early indications, is no – they’re changing over time. So this is tricky, this senolytic thing, because we still have this vast ocean of unknowing that we have to begin to fill in.”

Unanswered questions like these are why Campisi says she is “not a fan of jumping into clinical trials at this point – it’s still such early days.”

She references the tragic experiences in the field of gene therapy, which she believes was set back almost a decade after clinical trial deaths that happened due to companies “not knowing enough about when and where and how to deliver these reagents.”

“I don’t want that to happen in our field, and so I’m always preaching caution. I’m a basic scientist, and I think it’s my job to dig down and try to uncover as many facts as we can about senescent cells. But I talk to companies freely, because I want them to know the details and also the complications, so that they don’t wind up making a mistake.”

Read the second part of our fascinating interview with Judy Campisi HERE.

Images courtesy of The Buck Institute