Manchester BIOGEL to start providing kits for tissue growth as the company scales-up in 2020.

Another of the interesting companies we encountered at the 3D Bioprinting Research Symposium in London late last year (2019) was Manchester BIOGEL – a manufacturer of synthetic self-assembling peptide hydrogels. The company’s modular hydrogels provide a natural physiological extracellular matrix to support long-term culture, and have properties to simulate the natural environment of human tissue.

Manchester BIOGEL was co-founded in 2014 by two Professors from the University of Manchester – Aline Miller and Alberto Saiani – but the time spent raising funds and getting set up means that the company has only been properly active for around 18 months.

We spoke recently with Professor Miller to find out more about how bogeys fit into the Longevity landscape; we started with where it all began.

“Alberto and I had started doing some research together on proteins and how they assemble and connect with each other,” recalls Miller. “But proteins are quite complex molecules, so we ended up trying to synthesise peptide molecules. And then we spent probably 15 years of research into how peptides are assembled and how they come together to form materials.” 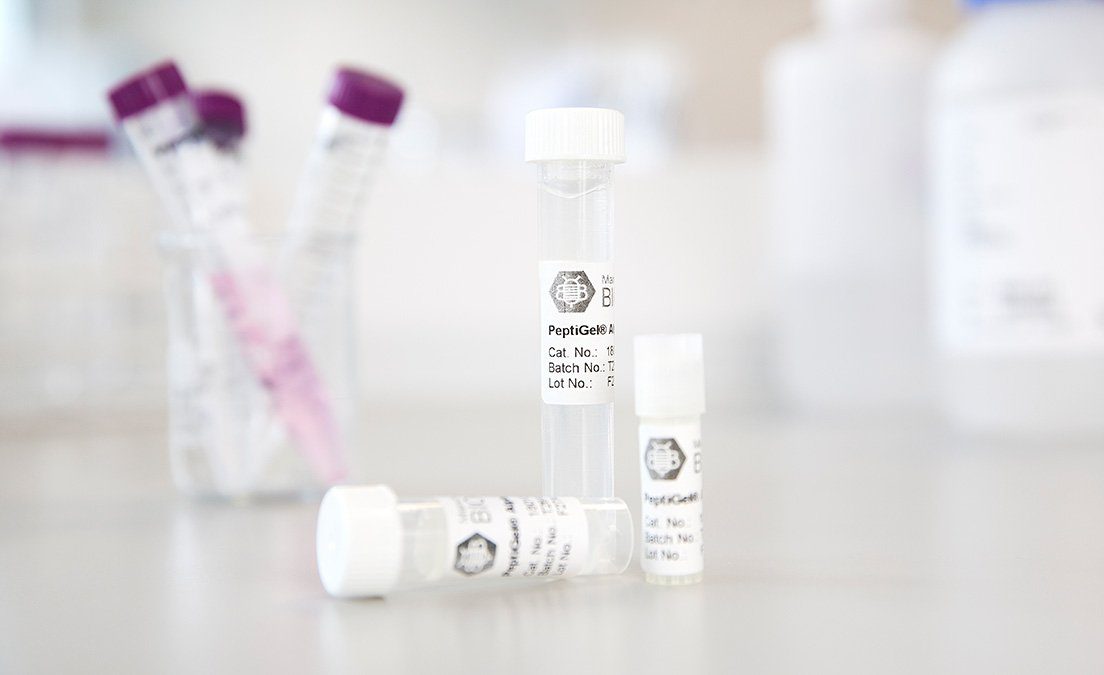 But as the Professors meticulously crafted and studied self-assembling peptides and started producing a range of hydrogels, they began to hear from people in the scientific community who wanted to try using the materials for cell culture work.

The current industry standard for this purpose is a material called Matrigel, which is a decellularized tumour grown in mice. The problem with Matrigel is that it is animal-derived and has huge batch-to-batch variability.

“Researchers get different results every time they do a study,” says Miller referring to Matrigel. This is where Manchester BIOGEL comes into its own, with a product that is fully synthetic, reproducible and with controllable properties.

“We started off talking with collaborators and potential customers and they wanted hydrogels that were easy and ready to use – so they could simply add their cells at room temperature and get results,” says Miller. “That’s when we realised there was a need for what we were doing and founded the company in 2014.”

Manchester BIOGEL raised a seed round of £150,000 from Deepbridge Capital in April 2015, allowing the company to set up labs, office space and to get some basic manufacturing facilities in place in its Alderley Park headquarters in Cheshire. Since then, the company raised additional funding of £750,000 from Kero Group in 2017 to develop standardised manufacturing protocols, recruit staff and get some sales and marketing activity going; followed by £1.5M from Deepbridge in 2019 to further expand the team, simplify the use of the materials and conduct further product development into bio-ink materials for 3D bioprinting.

“Our unique point is that our hydrogels are fully synthetic, which means we’re  one hundred percent ethical and also based on natural building blocks, which means we’re actually biocompatible, so you can translate material to the clinic,” says Miller. “The key is that we can make the materials with no batch-to-batch deviations – everything is consistent every time –  the materials are the same.” 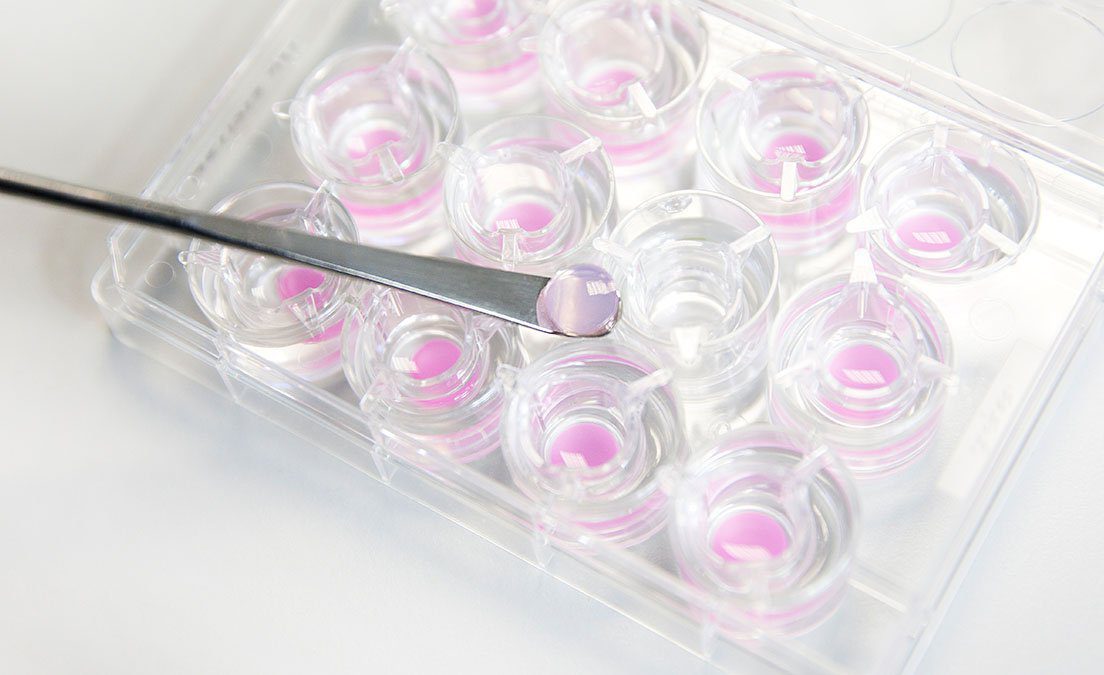 Another key aspect is that is Manchester BIOGEL’s materials are fully tuneable, allowing the chemical strength and the biological functionality within a hydrogel to be adjusted.

“This allows you to replicate the material properties of all types of materials that you encounter in the human body,” explains Miller. “So you can tailor your environment specifically to the different cell lines that you’re looking to regenerate tissue for.”

The next step for the company is to develop individual kits that it can sell directly for specific tissue model growth or disease model growth.

“For example, liver, kidney, and cardiac kits with everything researchers need to grow their organoids or individual organs,” says Miller. “Essentially, individual cocktails of materials and growth factors that you need to grow individual tissues or organs.”

Miller expects the first kits to start rolling out within the next 6 months, by which time, the company will be thinking about further scaling of the business. 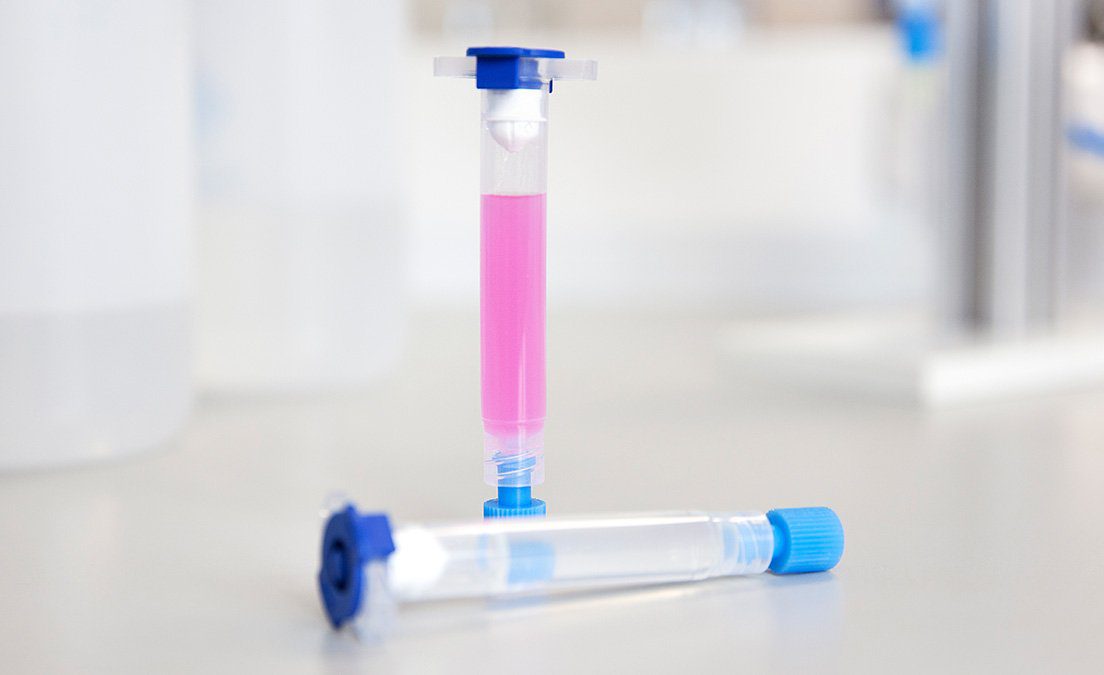 Manchester BIOGEL’s core business is as a materials company, supplying peptide hydrogels as a consumable for 3D cell culture or 3D bioprinting, but the company is also looking to exemplify the use of its hydrogels for specific applications – nerve repair or the development of 3D disease and organoid models for in vitro toxicity texting, for example.

One of projects the company is currently working on is a peripheral nerve repair application with clinical surgeon Adam Reid at the University of Manchester.

“… hydrogels are used … as a glue to allow two ends of nerves to be glued together – regenerating nerves to bring back function.”

“He is looking at using the hydrogels to culture adipose derived stem cells, which are fat stem cells,” says Miller. “The hydrogels are used as a support for the cells but also essentially as a glue to allow two ends of nerves to be glued together – regenerating nerves to bring back function.”

In the 3D bioprinting space, Manchester BIOGEL is looking at printing human organs and disease models, such as liver cells, with a couple of papers due to come out soon.

“What we’re trying to do is create mini liver models, so you can do early stage drug testing on the system,” says Miller. “You’re printing something with cells that develops into models that are very much three dimensional and human-like, so you get much better in vitro drug response at the early stage of development because you’re using 3D human models that are more akin to the in vivo situation.”

Miller is excited by the potential of bioprinting to really understand and replicate what’s happening within the human body but to do it in the lab – and its potential for combatting rejection and conducting drug toxicity testing. But she also recognises there are challenges in the field.

“I think the key challenge is in the biomaterial – the selection of the biomaterial and standardisation of biomaterials,” says Miller. “And it’s also about having biomaterials that are robust enough that you can actually then translate to the clinic – keeping the stability of the printed material for long enough to grow your cells in the lab, whether it’s three weeks, one month or six months, before you transplant it back to the patient. As well as being easy to use by a clinician.”

Another interesting area the company is involved in is the regeneration of oesophagus tissue.

“If you have a lot of acid reflux, for example, what is happening is that you are essentially burning the inside of your throat, and that often leads to cancerous or precancerous cells forming,” explains Miller. “The way a surgeon treats that is to scrape away the tumour cells, but that leads to a lot of scarring which can end up restricting the diameter of the throat and then people find it difficult to swallow.”

Manchester BIOGEL along with Professors Fliss Rose (Nottingham University), and Julie Gough (Manchester University) are exploring this by applying their hydrogels to the surface of the throat endoscopically as a spray. The gels contain two types of cell culture that regenerate the surface of the oesophagus – taking away any scar formation after the cancerous cells have been removed.

0
Scientists are moving closer to creating first human transplant organs from pigs. More than 100,000 people are on the organ transplant waiting list in the US...
Read more
By Danny Sullivan
January 14, 2020
Facebook
Twitter
Linkedin
ReddIt

Insurer puts down £20m to research an aging rethink

0
A new partnership between Legal & General and Edinburgh University aims to address the societal and economic implications of an aging society. The world is...
Read more

0
Could layoffs at 23andMe be a sign that the consumer appetite for genetic testing is declining? We expect consumer markets to transition to more...
Read more

Singapore agetech – ones to watch in 2020

0
Singapore thrives on its prime location at the crossroads of Asia's biggest markets, low business tax and great IT infrastructure; it is well-positioned to...
Read more